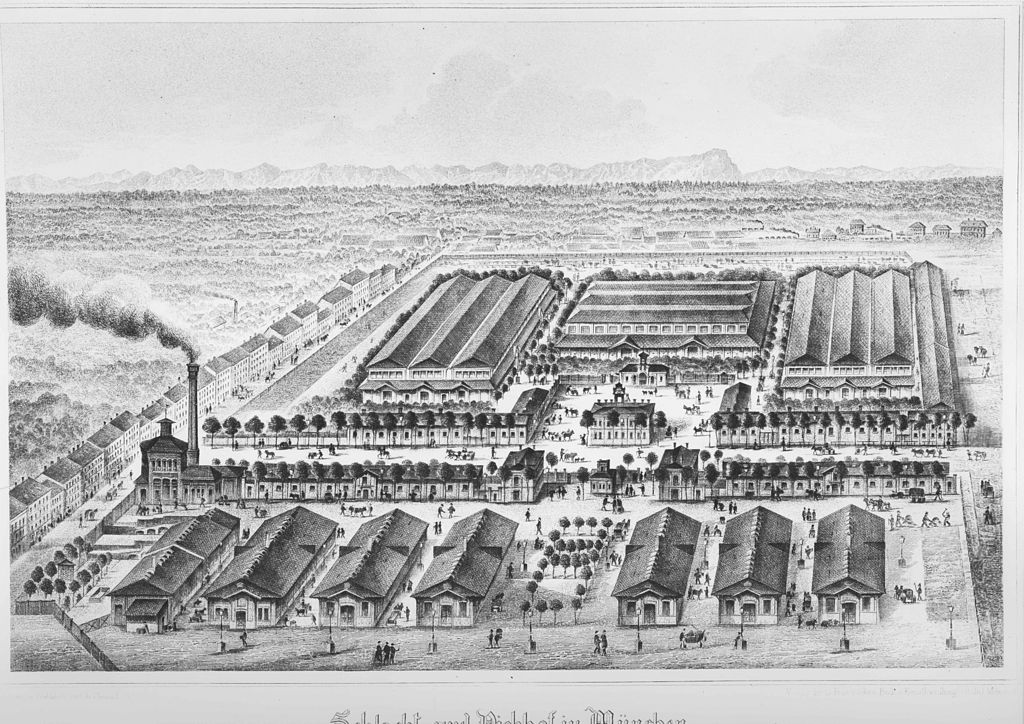 The Schlachthof is Munich’s historical slaughterhouse district, with the word “Schlachthof” literally translating to “slaughterhouse” in English. It represents our second case study of Spaces of Living in Transformation in Munich. Over the past decades, the area has undergone a fundamental transformation from a slaughter district to a cultural and artistic hub on the cusp of city-center gentrification. Nevertheless, today, although greatly reduced, the district still serves as a hub for animal slaughter while acting as a bourgeoning center for the creative side of Munich. First, a few notes on its origin.

Built between 1876 and 1878, the impetus for the centralized slaughter operation was to uphold hygiene, easily connect to existing rail lines, provide potential space for expansion, and to have ready access to water (hence its proximity to the Isar river (see map further below).

The size of the operation grew precipitately, and by the early 1900s, several hundred thousand cattle, pigs, and poultry were being transported, slaughtered, packaged, and distributed from the district. Additionally, it was the site of the popular Munich Horse Market from 1876 to 2006.

Fast forward a hundred years, with a gradual shift in consumer behavior, the amount of slaughter began to decrease. Between 2000 and 2004, the privatization of cattle and pig slaughter occurred and in 2007, the Munich slaughterhouse merged with the Munich wholesale market under the heading of “Martkhallen München” (Munich market halls). In fact, the enterprise has since been run as a municipal operation for historical and local political reasons.

Today—though at a reduced scale—the area is still an important hub of wholesale meat, poultry, fish, and delicatessen, earning the nickname of “Bauch von München” (Belly of Munich).

With the demolition of the main cattle halls in 2008, a large portion of the Viehhof, located at the center of the Viehhof was opened up. This quickly became an ideal space for artists and cultural activities due to its large surface area and ideal location within the city.

Located within the larger area of Ludwigsvorstadt immediately to the south of the city center, the area represents a veritable frontier of gentrification in a city with some of the highest rents in the country. Nevertheless, for the time being, the large, rather open spaces have been reinvented into cultural gathering spots and are currently in the process of being developed for other-than-food purposes. For a  detailed lay of the land, consult the map below (the Viehhof area is highlighted in blue).

When walking along the neighborhood’s sidewalks, you encounter a mix of railroad bridges, refrigerated transport trucks making their rounds, old brick buildings, and staked towers of storage containers covered in graffiti. This latter site is the alternative fortress of Bahnwärter Thiel located on the southwest corner of the Viehhof in the heart of the Schlachthof. The area is a space for a wide variety of cultural events including film screenings, open-air concerts, and other artistic gatherings.

Further up the street, another cultural project is under construction. The Volkstheater (“people’s theater”) is currently under construction. Located exactly where the former cattle-yard once stood, the three-year construction project is set to be completed in 2021. The building itself seeks to integrate the district’s urban character and history, which serve as inspiration for its design and materials. The completion of this massive yet eloquent brick-built complex will cement the district’s transformed nature as a modern cultural hub in the city.

While the Schlachthof District is undergoing immense transformation, there are of course concerns. As with many other examples in other urban contexts, the arrival or artists in post-industrial spaces, followed by major building developments could be construed as the preemptive signs of the unstoppable force of gentrification. With additional residential projects planned for the area, the neighborhood’s residents are adamant in their wish for the historic district to maintain its distinct and diverse identity.

As consumer behavior and animal slaughter have undergone changes, so too as the physical space that has served as its center of operations for nearly 145 years. Today, the Schlachthof embodies transformation—past, present, and future—and continues to serve as a fascinating site of intersecting commercial, cultural, and residential interests.

Cover image: A representation of the newly-opened Schlachthof in Munich in 1878. The main halls located in the upper half of the complex formed the Viehhof. Also notice in the background, the rising Alps with Zugspitze to the far right. Source: GMH~commonswiki via Wikimedia Commons, public domain.