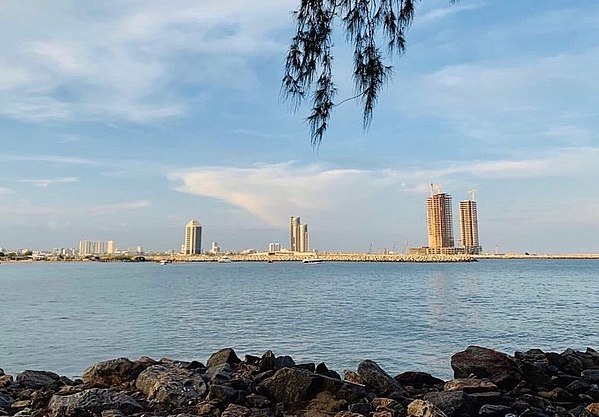 What is the city and what forces frame its identity? Developmental mega–city projects can illuminate our understanding and guide a re-thinking of the actual meaning of the city. An evaluation of the process of recovering the ocean space to construct the 10–million square meter Eko Atlantic City (EAC) in Lagos, Nigeria, can help us redefine the city with the lenses of political ecology and social justice. The EAC is a large-scale urbanisation project that leaves a plethora of questions in inquisitive minds, especially given the project’s lopsided proceeds destined for the upper class. It has been christened a climate change adaptation project, but the larger quest borders on adaptation for whom? The discourse in the paper is structured in three parts to answer the following questions: 1) what is the socio-ecological inclusiveness of this oceanscape before the inception of EAC; 2) what are the dominant narratives in the literature on the Urban Socio-Ecological Metabolisms (USEM) that continue to trail the conception and birth of EAC; and 3) to what extent has EAC charted the course for a new urban vocabulary beyond neoliberalism to produce a new USEM framework. Attempting to solve these puzzles becomes necessary as the socio-ecological gaps between socio–economic groups widen with attendant disorder out of the supposed pursuit of order in urban environments.

Based on the thermodynamic roots of inequality (Smerlak 2016), this development project was approached with the lens of socio-ecological competitive exclusion. The thermodynamic roots of inequality posit that “economic stratification is measured by the entropy of the wealth distribution,” and “precariousness is the thermodynamic force conjugate to upward economic mobility” (40). I examined the USEM at EAC from a neo-Marxist perspective using Marx’s approach to analyzing the dynamic internal relationships between humans and nature (Pinceti, Bunje, and Holmes 2012; Bahers, Tanguy, and Pinceti 2020) through politically-driven flow of capital and energy, and the effects on the socio-ecological milieu.

Throughout the paper, by metabolism, I mean “the processes of environmental transformation brought about through the labour process, in which human capacities and non-human potentials are combined in the production of new environmental forms” (Groves 2009,  208). According to de Molina and Toledo (2014, 84), metabolism has five components: appropriation, transformation, circulation, consumption, and excretion. In the case of EAC, the appropriation of nature  (the Atlantic Ocean space), which had hitherto served the common needs of all, with its eventual transformation into a climate adaptation city circulated to only the excessively rich very low percentage of the Lagos populace suggests the involvement of metabolic kineticism. This ‘consumption of nature’ leads to the excretion of worst byproducts in the environment, which disproportionally impacts the lower class.

Accordingly, I begin by positing that environmental production processes are often accompanied with energy dissipation effected by kinetic losses and gains. I argue that EAC provides us with a redefinition of the city as an urban metabolism engine characterized by socio-ecological kinetic frictions. This kineticism portends that the city is made up of social (human) and ecological (nonhuman) molecules in rapid flows with attendant socio-ecological collisions. The outcomes are social and ecological imbalances, instrumentation of climate change stories to aggravate social inequality, and heated polities

Lagos’ coastline is a composite network of interconnected lagoons, inland lakes, rivers, wetlands, channels, islands, and peninsulas with a population of over 14 million people in the metropolis area only (World Population Review, 2020). The city is characterized by urban poverty, coastal slums, land use pressures, climate change, and its over 100 years of coastal erosion and ocean surge. EAC is a modern world-class city politically praised as being eco-friendly at the brink of the Atlantic Ocean but separated from it with the Great Wall of Lagos, which is a sea wall 8.5km in length and 12.5m in width. The area in question, known as the Bar Beach was an inclusive socio-ecological place for both nonhuman and human nature. Along with a rich biodiversity sheltering important fish and marine mammal populations, the Beach was an important site of cultural, religious, spiritual, and recreational activities (Eko Atlantic 2012). In order to make way for the EAC, not only was this site evicted of its nonhuman residents but millions of poor masses were displaced for its construction following the project’s creation in 2008. Today, the EAC has become an exclusive urban enclave with a daily flow of 150,000 commuters and housing for only 250,000 inhabitants.

Once the EAC was planned, socio-ecological metabolisms were set in motion at the Beach. The eviction and the construction events are perfect illustrations of political ecology linking “the condition and change of social/environmental systems,” and showing “the organization of these systems and how they work to metabolize the biophysical environment for human use” (Pinceti et al. 2012, 199). The humans benefitting from the project are the upper-class elite who not only forcefully evicted the weak and helpless lower-class majority but bulldozed the nonhuman nature at the Beach to the point of extinction. This class dominance of the majority lower class by the minority upper class attests to the commodification of nature at the Beach and created socio-ecological imbalances and tensions that normally trail this kind of capitalist urbanisation. The EAC is indeed a privatisation of general public goods of the Atlantic Ocean by a very rich minority who acted without any recourse to socio-ecological justice.

Dominant narratives (Ajibade 2017, Crispin 2019) are unequivocal on the negative effects of the far-reaching re-engineering of the Atlantic Ocean at EAC on the USEM of the cityscape. They debunked the politically motivated acclaimed benefits of the project as climate change adaptation. Rather, the overriding arguments forecast the project as a means of mass disruption to the ecological systems of the oceanscape, reducing its biodiversity and diminishing its aquatic resources. It is deemed that the EAC project will lead to an excessive increase in carbon footprints and an increased ocean surge, which will adversely impact neighbouring communities. Indeed, it has aggravated the suffering of the poor masses residing in this oceanscape (Thomas and Warner 2019). Specifically, during a lethal ocean surge in 2012, the death casualty at one of the neighbouring low-income estates was 16 while about 1500 residents were displaced in addition to the disasters in many other adjoining estates (Ajibade 2017). To what extent then has EAC demonstrated the conquering of nature by humans? EAC is only a relocation of the ocean surge and associated coastal erosion downstream and worsens the socio-ecological menace of Greater Lagos.

The embodied and operational energy dissipation along with socio-ecological frictions that accompanied the creation of the EAC, destined for rather affluent inhabitants from the beginning, theoretically suggests energy dissipation of urban socio-ecological metabolisms. The ruling class represented by a collaboration of Federal Government of Nigeria and Lagos State Government through authoritarian brutality, hired the multinational capitalist South Energyx Nig. Ltd in 2008 to evict the hitherto inclusive ecosystem services and residents of these coastal areas. Through the instrument of governmentalities, the state political apparatus was used to enforce the marketization of this Atlantic coast by an elite upper class without any alternative inclusiveness for the poor masses and non-self-defensible nature of the ocean space required in a true democracy. This legitimisation of socio-ecological coercive oppression implies an all-inclusive neoliberal practice of capitalist ideology. The lopsided power relations in this political economy not only present EAC as an unjust city but as the epitome of radical gazetted class distinctions. Such class-based urban governance has its roots in colonialism with its attendant socio-spatial segregation of the elites from the common populace.

The foregoing suggests that the components of an USEM framework for EAC are currently influenced by the tenets of capitalism, neoliberalism, authoritarianism, class differentiation, socio-spatial segregation, and socio-ecological disorganisation. To overturn this overtly exclusive enterprise, the project demands pushing for an intellectual reasoning into suggesting strategies for framing a truly democratic and inclusive urban governance at EAC.

Smerlak, Matteo. 2016. “Thermodynamics of inequalities: From precariousness to economic stratification. Physica A: Statistical Mechanics and its Applications 441: 40–50.