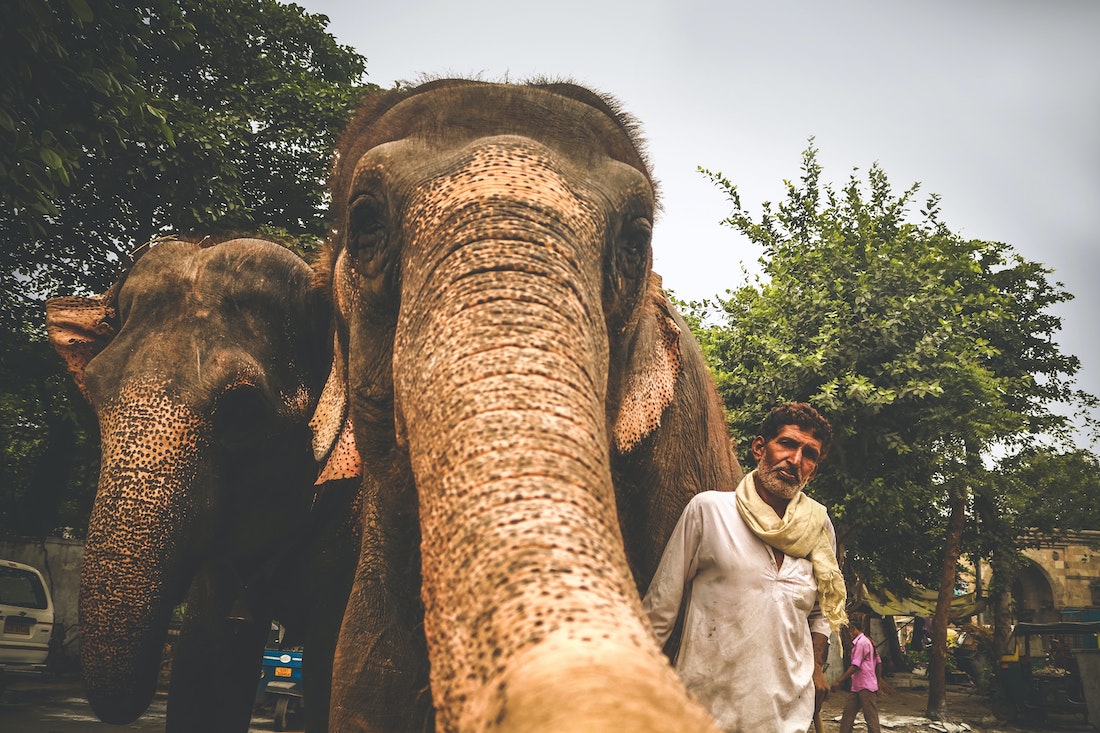 Urbanization is at the forefront of the challenges that India and several other nations of the Global South confront in the twenty-first century. Our rapid urbanization is leading to severe environmental loss or degradation, seriously affecting the lives of most nonhuman species, with which we share our world. What remains overlooked, however, is the growing synurbization of our wildlife populations, whereby various urbanizing influences, primarily human activities, force individual animals to adapt to these altered socioecologies for their very survival. And although we are now concerned about the urbanization of nature, viewed as a transformative process, we continue to be silent about how urbanization alters nonhuman lifeworlds.

This essay reflects on the unusual lives of elephants in the plains of southern India, to whom we have brought home the city. The beginnings of their synurbization were innocuous enough, with transport infrastructures built through the forests, promising development to otherwise isolated human communities but these linear intrusions effectively began to fragment the coherent lives of elephant groups. The farming communities at the forest periphery now let their cattle and livestock graze the forests, competitively with the elephants, while the forest management built cemented waterholes to provide water to the drying forests and watchtowers to monitor the restless wildlife. Although the elephants became familiar with humans and their intrusions in the course of the forests opening up, they eventually decided to come out of the forests. Their movement was further expedited by our changing land use, especially the development of peri-urban agriculture around the shrinking forests.

Expanding agricultural fields, facilitated by the transition from dry-land cropping to water-fed agriculture, now provisioned these forest elephants with a staple source of rich human foods, triggering off urbanized wants and new opportunities in their lives; a process of urbanization, as defined for humans by Pitirim Sorokin (1928) and Talcott Parsons (1949), had begun. This synurbization has manifested through extreme behavioral adaptations displayed by individuals against increased risks of mortality, including often-maladaptive reformations in their social lives. The once-solitary adult males have now come together to form protective, stable associations against the farmers, who guard their fields. Elephants often spend their days immersed in village water bodies to escape being driven away, at night they walk for miles to forage in crop fields and orchards.

The urban has, therefore, permanently altered the structure of the landscape and profoundly influenced the lives of its inhabitants, both human and nonhuman. Crucially, the essential nature of their relationship has transitioned from the human reverence for elephants to agonism, from peaceful coexistence to aggressive competition. The forests have been disrupted forever, urban environments, once dominated by humans alone, inexorably appropriated by the elephants for their own. As Chris Philo and Chris Wilbert (2000) point out, the orderly animal spaces, traditionally decided upon by people, have now been replaced by beastly places, which the elephants themselves have established – and all these dramatic synurbic transformations within the life span of an individual elephant!

Concordant with these bewildering changes have appeared other novel, human-devised, ethologizing infrastructures: obtrusive electric fences, deep elephant-proof trenches, prying camera traps. These intrusions have pushed the now-rurban elephants those learning to adapt to rapidly humanizing environments to further develop innovative, but ultimately maladaptive, behavioral strategies that seem to initially promise survival but lead inevitably to a losing battle with forces far beyond their control.

Living often up to seventy years in the wild, elephants have excellent memory and cognitive capacities. These are reinforced by collectively established cultural traditions, which allow them to access and navigate towards resources while avoiding threats as they migrate annually across their extensive home ranges. Close examinations of short-term decision-making by the rurban elephants and their life-histories in the long term could thus provide insights into their perceptions of changing spaces over time, and finally account for their conceptualization of urban spaces. Is it then possible for us to investigate the trialectics of perceived, conceived, and lived spaces in our elephants, so elegantly philosophized by Henri Lefebvre (1991) and Edward Soja (1996)?

Over the last seventy years, the home range of an individual male Asian elephant in the wild, born into a herd in southern India, has changed from being a forest to an agricultural village, his food from natural forage to cultivated crops, his activities more nocturnal than diurnal; he is no longer solitary but a member of an all-male group. He has learnt to break electrified fences, looks to either side of the road for traffic before crossing a six-lane highway and spatio-temporally navigates to avoid interacting with humans. The perceived, organic world of the elephant, therefore, includes humans, infrastructure, and novel but stressful associations, almost in the everyday. The female elephants in this landscape have not, however, changed as much, protected as they are by their maternal instincts to keep their young away from the crop fields – the risks involved are forbidding.

The perceived space of an elephant born today would thus be very different from that of its mother or other older relatives. For a newborn elephant, interacting with humans is now a norm, crossing a railway track part of its routine and water bodies are not just for drinking, bathing or socializing but constitute important external refuge amidst humans. As elephants in our study landscape now display a strong affinity for forage, including human-origin foods, a weak affinity for the plentiful water now available, but a severe avoidance of humans and their infrastructure, we can perhaps visualize dramatic changes in their conceptions of space over time, from that of a world when there were only forests with limited water sources, exclusively natural food and, most importantly, no humans.

The male rurban elephant of today cannot, however, afford to live in a fictional, conceived world. He needs to learn the nature of his habitations, the larger home range, the paths he must take to find his forage and the migratory routes through the hills. These are his lived spaces and he formulates them through his individual experience, social learning from his compatriots or the cultural traditions that pervade his society. Each experience, each learning is unique for the individual but collective learning also pervades the group. We can then only imagine how the lived space for every male elephant today must represent a constant struggle between a generationally determined, conceived space of an idealized, nonhuman existence and a currently perceived world of synurbic resource availability and impending threats, shaped by newly acquired knowledge of rapidly changing, spatial realities.

What then might urbanization entail for animals themselves and how can we evoke animals’ geographies of the urban, with and against the grain of human design? It is imperative that we track these sentient and sensitive ecologies in ways that are attentive to nonhuman lifeworlds, not just as fundamental constituents of the urban, but to ecologize urban planning and governance in the days to come. We need to rethink, not only the urban, but the human, the animal, and our methods of governance, beginning from the ground up to include the broad assemblage of sentient actors that constitute urban spaces. The behavioural ecologies of the nonhuman, with typically human-dominated political ecologies, have thus come to represent one of the most diverse challenges and opportunities for lively engagements in the urban of today. Our common worlds and entwined futures are here and now.

Cover image: Coexisting in the city. Courtesy of Dhaval Parmar via Unsplash.