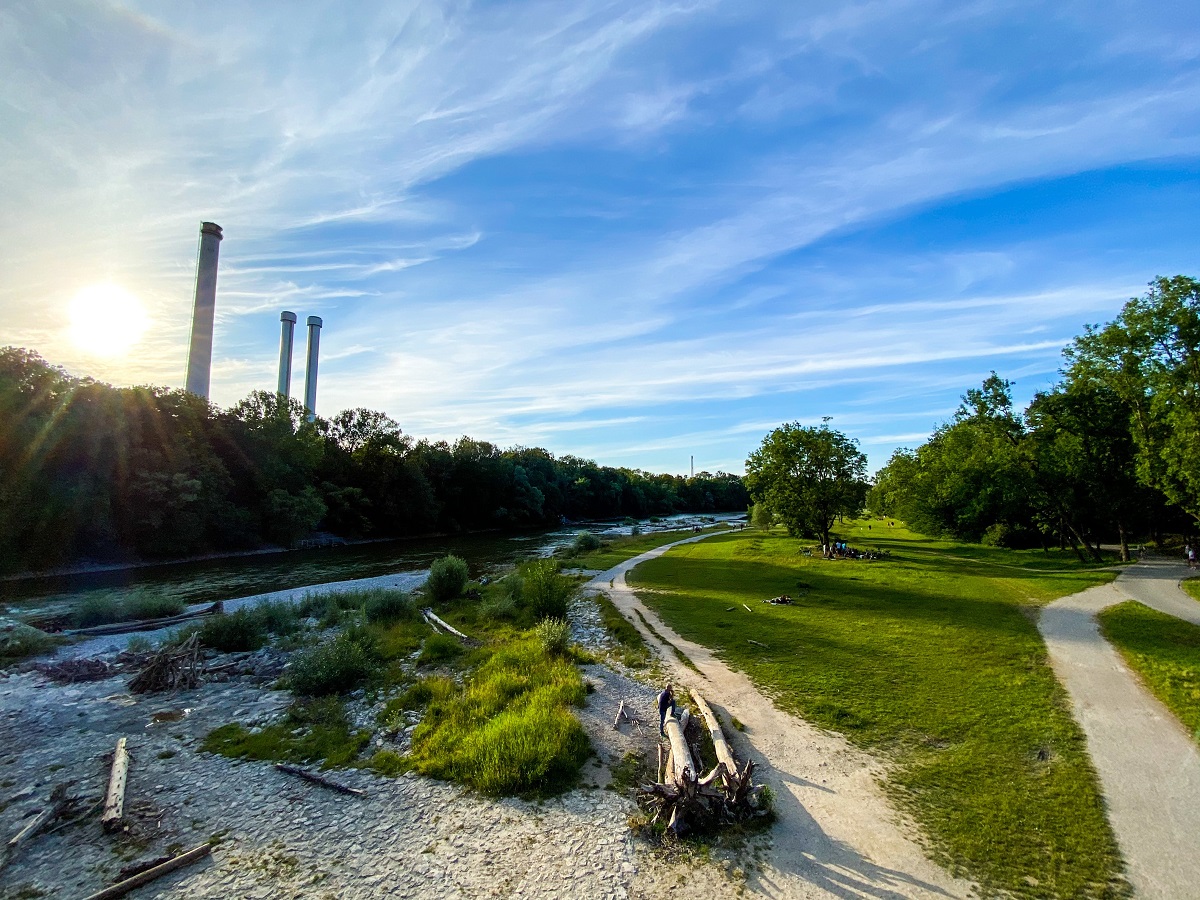 The Urban Environments Initiative (UEI) held its third workshop entitled Re:Thinking the Urban on 22 January 2021. The online workshop brought UEI members from across the globe together for an in-depth analysis and discussion regarding two case studies of “spaces of living in transformation” that have undergone significant change in Munich—the Isarauen and the Schlachthof. The workshop was divided into two main parts, the first being dedicated to an exchange of thoughts, reactions, and opinions regarding the two case studies while the second half focused more on the planning of the upcoming UEI conference in June 2021 (more details below).

The Isarauen and the Schlachthof case studies represented an excellent starting point for the workshop as participants had been introduced to them via two brief introductory articles (click on the links above). The Isarauen is a prime example of an urban green space that has been renaturalized in order to return “nature” to the city. The Schlachthof and Viehhof, on the other hand, are one of the old slaughterhouses and cattle markets of Munich. While parts of the complex have been transformed into creative political and cultural spaces that are increasingly under pressure by gentrification, the district continues to maintain its importance as a food hub in the city.

The original plan for the workshop had been to invite participants to Munich for sidewalk tours of both spaces to learn about their character, history, and unfolding transformations through immediate experience of and engagement with the sites. Due to the ongoing Covid-19 pandemic, we adapted the plan by preparing two highly immersive videos for each case study. To get a feel of the spaces, the videos capture some of the everyday sights, sounds, and sensations of these dynamic spaces. To view the videos simply press play on both links below:

In breakout sessions, participants discussed both case studies. As the UEI brings together experts from a variety of disciplines such as architecture, biology, planning, anthropology, history, and geography (to name a few), the discussions were perfect conduits for interdisciplinary debate. The discussions concerning both studies centered around three main topics that favored interdisciplinary debate, namely restoring nature to the city, gentrification, and planning processes more broadly.

The first of these topics focused primarily on the Isarauen case study, where participants tackled the idea of “renaturalization” and what this implies. From a planning perspective, it was seen as a way of restoring “nature” within the city, albeit a partially artificial or controlled “nature,” as it is subjected not only to regulation and planning processes of the municipal government but, as anthropologists pointed out, also to culturally informed ideas of what “nature” is and what does not count as “natural.”  Turning to anthropological and biological considerations, it was argued that further inquiry into the management of ecological systems that are considered to be “natural” should be perceived as they are, in fact, very much human-made and managed, and may indeed run against what is actually “natural.”

As the area around the Isarauen is tremendously popular and heavily impacted by human use, how do birds, fish, and plant life cope? Who advocates for their right to urban nature (even when it is human-made)? These questions led to a discussion of the social history of the Isarauen and those involved in pushing for the renaturalization project. Reintroducing nature into the city is not a guaranteed success, as it may benefit some while adversely affecting others.

Discussions around the Schlachthof similarly touched upon other-than-human impacts given its importance as a slaughter and food hub for the city. Though slaughter operations have reduced, the Schlachthof is still a prominent feature of the district, which is welcoming an influx of new residents due to gentrification. The neighborhood has attracted increasing attention given its proximity to the city center, lower rents, and artistic flair (embodied by the Bahnwärter Thiel—a creative cultural gathering space—and the new Volkstheater [“people’s theater”]).

Nevertheless, the multifaceted layers of its history and ongoing function as a slaughterhouse district continue to manifest in the face of these changes. A key example is the occasional smell escaping into the air from the slaughterhouse, causing discomfort to nearby residents who may wish to forget a key aspect of the Schlachthof’s identity.

More broadly, gentrification as a process was a matter of particular debate among participants from a multitude of disciplinary backgrounds, with participants mulling over the controversies surrounding its seemingly ubiquitous manifestations in urban centers across the world. Ultimately, it was advanced that gentrification brings about human changes as well as changes to the more-than-human world. But what impact does gentrification have on the plant and animal life of urban areas?

Bridging both case studies in theory and practice was the key topic of planning. Projects such as the renaturalization of the Isarauen in the early 2000s, or even the initial creation of the Schlachthof in the 1870s, were planned projects with specific purposes for residents of the city. One was intended to restore nature to the urban landscape while the other was intended to create a safe operational space for slaughterhouses to avoid the spread of disease.

These discussions led our interdisciplinary group to a common question: Are planning processes ever really finished? A project must of necessity be finished at some point, but is this not a contradiction given that continuous processes transform these spaces? Perhaps, we must reshape our understanding of planning so that it is seen as a multifaceted process that involves a wide range of actors.

Both the Isarauen and Schlachthof case studies succeeded in fuelling discussions about key issues such as planning processes, gentrification, human/other-than-human relations, and other challenges that are present in urban contexts across the globe.

In order to continue the work started over the past two years, the UEI is organizing a virtual conference based on the theme of “Irritations and Unforeseen Consequences of the Urban” to be held from 30 June to 2 July 2021. The conference will consider key themes related to making, planning, and negotiating urban environments with an emphasis on interdisciplinary collaboration. If you are interested in contributing or participating, please visit the Events page here.

Spaces of Living in Transformation—In Times of Uncertainty

Irritations and Unforeseen Consequences of the Urban