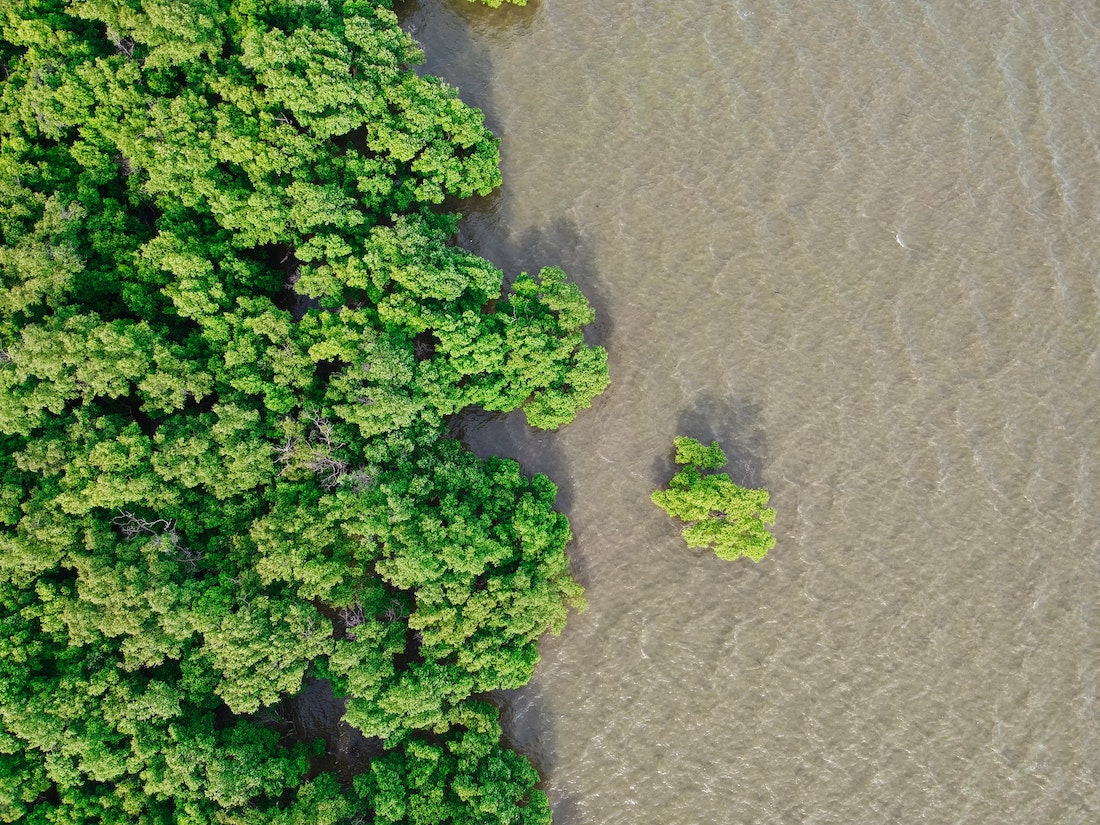 For the past several years, natural scientists Mary Killilea and John Burt and anthropologist Anne Rademacher have been thinking about how spaces of nature emerge, and how societies engage them, in coastal cities around the world. Our starting point, and the focus of our presentation at the UEI’s recent Spaces of Living in Transformation workshop, was the rapid proliferation of mangrove forests in coastal Abu Dhabi. 1  Since urbanists in the social sciences and humanities usually associate urban growth with degraded and dwindling natural habitats, noting the expansion of this biodiversity-rich forest, and learning that some of it was unplanned, struck us as an important opportunity to explore the scientific contours of the phenomenon while asking the social question: what do societies identify as “nature” in cities, and when and how is that nature considered commensurate with forms of nature beyond the city? In the present case, we sought to understand the drivers of mangrove forest expansion in the context of rapid urban growth while also addressing whether and how newly emergent mangrove areas were socially understood as “natural.”

The case of rapid mangrove proliferation in coastal Abu Dhabi relates to several critical questions shared across the fields of ecology and environmental humanities. First, while the particular vulnerability of coastal cities in the era of climate change is well noted (IPCC 2020, Paprocki 2018), the issue of coastal habitat augmentation—particularly to the extent that it is in part unplanned—is barely recognized outside of the natural sciences, where it is increasingly gaining attention (Burt et al. 2012; Forman 2016; Mayer-Pinto et al. 2018). Second, while coastal cities are documented to contain the majority of city dwellers worldwide, they are rarely studied as co-productive 2 of ecological processes. Indeed, the vitality of one, the city, is almost always assumed to indicate the withering, or even absence, of the other, nature (Rademacher et al. 2019). Our work seeks to better understand if and when certain forms of urban nature might be enhanced by anthropogenic infrastructure and processes and, in turn, how city residents understand and encounter what can appear to them to be “spontaneous” nature spaces.

By using the term, “spontaneous,” we simply mean to emphasize our interest in the ecological outcomes of industrial processes that seem to add to nature rather than deplete it. New mangrove areas in Abu Dhabi, for example, perform key ecological functions like habitat provision, carbon mitigation, or coastal resilience while also serving as points of interface between city residents and a certain forest type (Friis and Burt 2020). In an era when “urban nature” operates largely as a shorthand for relatively manicured and managed urban parks, the proliferation of dense coastal mangrove forest in Abu Dhabi suggests to us a need to better understand the co-productive relationships between urban processes and urban flora and fauna, and the ways that urban social communities, whose everyday lives are often highly detached from active encounters with nonhuman life, cultivate new ideas of nature and attributions of meaning to it (Choy 2011; Jasanoff and Martello 2004; Günel 2019; Tsing 2015).

Consider some details of the Abu Dhabi case:  In early March 2019, an Abu Dhabi Gulf News headline read, “Let Red Foxes Enjoy Natural Food from Mangroves” (Kader 2019). The article, one of several covering a recent proliferation of urban wildlife sightings in Abu Dhabi’s expanding coastal mangrove forest zone, described encounters with red foxes—and with them, delight, surprise, and growing popular concern for these seemingly spontaneous forests and the species they nurture. This was in many ways the very opposite of more conventional assumptions about the relationship between coastal mangroves and rapid urban development: the red fox, along with the hundreds of fish, bird, and marine species that depend on mangrove forests, have proliferated precisely because a significant part of the coastal zone has become host to new forest areas.

While mangrove proliferation in Abu Dhabi cannot be attributed to a single cause, several transformations in Abu Dhabi’s environment are important to note (Burt et al. 2019;Burt and Bartholomew 2019; Sale et al. 2011). As urban populations beautify their gardens and parks with highly irrigated green spaces, the well-fertilized freshwater runs off into the hyper-saline coastal areas, reducing saline stress and providing more optimal conditions for growth of mangroves and other plants. These, in turn, serve as habitat for innumerable resident and migratory species. Mangroves also expand due to ever-higher average temperatures in tropical latitudes.

As water dispersed plants, mangrove seeds often travel further than those dispersed by wind or animals, so mangrove expansion in rapidly transforming urban regions tends to happen more quickly when compared to terrestrial plants (Saintilan and Rogers 2009; Yagoub and Kolan 2006). As a consequence, urban citizens, visitors, and scholars have observed a largely unexpected and seemingly spontaneous effect: coastal mangrove forests have expanded, and with them have come sightings of a vast array of animal species and new opportunities to encounter them first-hand.

The new and seemingly “spontaneous” appearance of this, the only evergreen forest type in the Arabian region, challenges many scholarly and popular assumptions about the automatically destructive relationship between dense urbanization and some forms of natural habitat. In fact, in many parts of the subtropics, growth of mangroves is a common, ecologically complex feature of urbanization. New mangrove areas differ significantly from conventional “novel ecosystems” 3 insofar as they can be partially unplanned, and so unexpected, accompaniments to urban growth and development, rather than deliberately engineered ones. 4

1. Not through restoration plantings, but rather through natural processes. A rapid increase begins in 1999, according to Yagoub and Kolon (https://link.springer.com/article/10.1007/BF02990747).

2. We use “coproduction” in the sense used by Rademacher, Cadenasso, and Pickett (2019).

3. A novel ecosystem, as defined by Richard Hobbs and his colleagues, is “a system of abiotic, biotic, and social components (and their interactions) that, by virtue of human influence, differs from those that prevailed historically, having a tendency to self-organize and manifest novel qualities without intensive human management.” (https://www.ser.org/news/311030/Whats-Wrong-with-Novel-Ecosystems-Really.htm)

4. Ecologists are increasingly recognizing the complex tradeoffs that urbanization’s mangroves involve. Though nurtured by urbanization’s wave, mangrove forest proliferation more generally can exclude other important species (e.g. saltmarshes). Thus while there may be perceived benefits from an anthropogenic/aesthetic lens as well as value for different species, there are also costs that need to be considered. As an example, we point to Botany Bay, Sydney. See also Branoff (2017).

Burt, John A., and Aaron Bartholomew. 2019. “Towards more sustainable coastal development in the Arabian Gulf: Opportunities for ecological engineering in an urbanized seascape.” Marine Pollution Bulletin 142: 93–102.

Tsing, Anna. 2015. The Mushroom at the End of the World: On the Possibility of Life in Capitalist Ruins. Princeton: Princeton University Press.

Reclamation as a New Agenda for Urban Environmental Justice