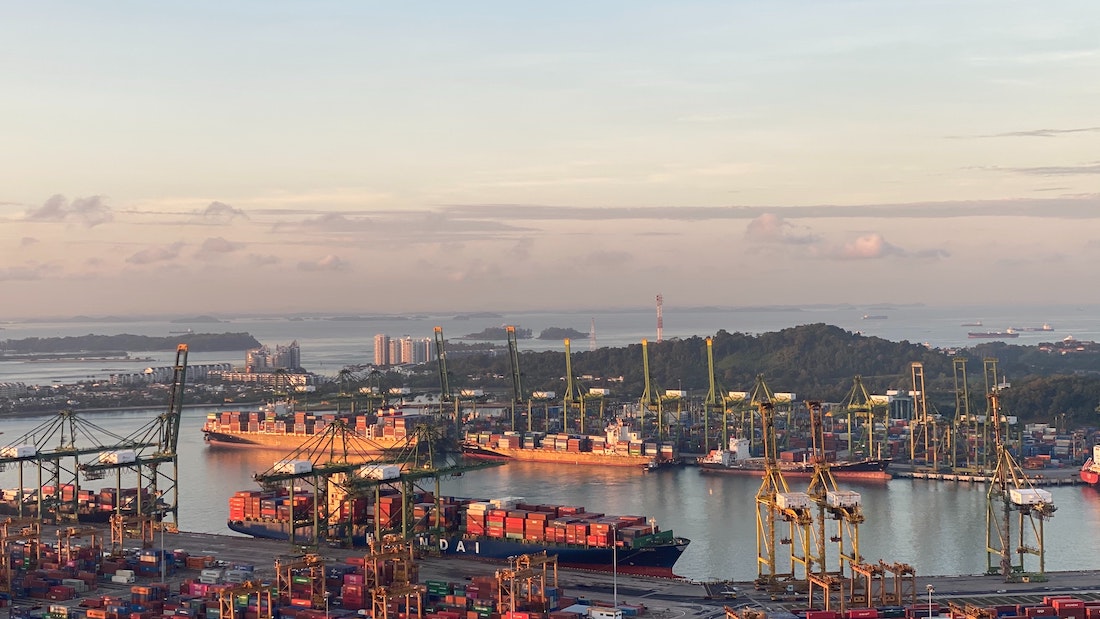 By: Felix Mauch. Munich Center for Technology in Society,
Technical University of Munich.

In contemporary capitalism, making is inseparable from moving. The world is bound up in supply chains, moving commodities from mines and farmland to factories and supermarket shelves. Within these networks, logistics sets the rhythm. The science, technology, and art of efficiently managing the mobility of things and people is increasingly proving to be an omnipresent phenomenon (Tsing 2009). For advocates and critics alike, logistics is “trans, inter, and post. It cuts edges, crosses boundaries, and most certainly works outside the box”. And it is about (just-in) time as it is most certainly about (seamless) space (Cowen 2014).

Logistics therefore, both materially and metaphorically, is inextricably tied to urbanization. As a managerial rationality and a material practice for reorganizing global space in service of expanding the total circuit of flows, it is fundamentally dependent on cities and their infrastructures to keep the constant movement of commodities going. The systems that coordinate the circulation of goods, ideas, and capital into integrated networks—from roads and railways to loading docks, warehouses, cold storage, and fulfillment parks—shape built environments, by creating operational landscapes of connectivity and transmission, designed according to a paradigm of efficiency and control (Chua et al. 2018). From whichever perspective you look at it, one thing is becoming more and more evident: urban worlds and tissues are made by logistics.

At the same time, cities can be major obstacles to circulation. They entail spheres of heterogeneity, social complexity, and unruly environments with which logistics has to deal. This friction between visions of unimpeded flow and the messy realities on the ground is a starting point for the reflections that follow: How is the urban produced and reproduced logistically? What kind of infrastructures and ecologies result from this? Who becomes mobilized and immobilized by processes of logistical urbanization? And what forms would such a development take? Is there such a thing as a comprehensive logistics city?

With regard to the latter, one might consider the historical genesis of major transit ports such as Singapore, Dubai, or Aden to be, among others, illustrative examples; vast agglomerations of key infrastructural services to manage the mobility of things between sites of production and consumption, shaped by the constant motion of goods, capital, and migratory labor. Urban life and livelihoods are entirely dependent on being the hinge of global trade routes, which are fundamentally tied to legacies of colonial planning and regulation. Over the course of the long nineteenth century, these logistics cities avant la lettre emerged as peri-urban formations, designed to enable a wider region in governing economic services. Theirs was a telos of efficiency, seeking to “improve” trade by minimizing the city’s intrinsic messiness as well as optimizing spatial interaction. Zoning maps plotted warehouses, communications centers, procurement offices, and freight facilities next to each other, interspersed with residential zones, naval defensive works, cropland, and traversed by large-scale transport infrastructures.

As an alternative to Europe’s industrial metropolises, the colonial logistics city eschewed manufacture and production. It was instead dedicated to the facilitation and synchronization of commodity flows, thereby enabling a unique kind of globality, in which the material network of distribution systems made the otherwise mysterious abstractions of capitalist forces very concrete. While the logistical gaze stretched borders and circumnavigated imperial regulation by supporting the establishment of highly secured free trade and special economic zones, urban rhythms and everyday life were recoded according to the logics of interoperability and the cost-efficient provision of operational territory.

But to shift back more towards the conceptual: As recent theoretical contributions from urban history and STS emphasize, the analysis of space and spatial relationships allows not only for a more nuanced understanding of the city—but the urban itself (Rodger and Rau 2020). That is to say, the fine grain of socio-economic, political, and envirotechnical characteristics, the means by which they overlap, and how they align through synergies of actually heterogeneous components. Logistics nests itself in exactly these interfaces. Between the protocols and calculations of management and the contingencies of things on the ground, it lies down a murky and slack mediating layer that allows the former to exist in the latter. This is enabled through a set of specific planning efforts that employ elements of architecture, infrastructure, terraforming, and landscaping. In this manner, I would argue, the growing importance of logistics (cities) forms an integral part of what is nowadays intensively discussed as “planetary urbanism” (Brenner and Katsikis 2020).

According to this approach, the popular claim that we now live in an “urban age” because the majority of the world’s population lives in cities is a somewhat misleading premise for understanding the urban. For cities are neither isolated manifestations nor universally replicable expressions of a universal condition, but embedded within wider, territorially uneven and constantly evolving processes of urbanization at all spatial scales; encompassing both built and unbuilt spaces, across land, water, sea, and atmosphere. Take Singapore as an example. Both historically and from a contemporary perspective, its politics of incorporating productive territories in neighboring Malaysia and the Indonesian archipelago has been indispensable to urban development. In the island-state metropolis, vital resources including primary products, labor, energy, and increasingly sand are withdrawn from the wider region. Such co-existence of the logistics city with extra-urban territories of high-intensity extraction and agro-industrialization not only sheds light on the role played by hinterlands in the production of urbanity (Ghosh and Meer 2020), but also invites consideration of maritime logistical infrastructure—sea lanes, shipping corridors, and dredged canals—as urban phenomena. Which, in return, raises the question: to what extent is logistical urbanization pushing even beyond the city? And how does it engender ecologies, materialities, and subjects along the supply chain?

For all its material impact, however, this logistical quality of cities like Singapore and others goes largely unnoticed in the metropolitan imaginary. This is precisely because banal operational functionings tend to be overlooked and made invisible by more spectacular elements such as iconic high-rise starchitecture, waterfront development, or nostalgic port romanticism. A closer look, on the other hand, reveals that logistics is amongst the clearest distillations of how capitalism operates: transforming “natural” features into streamlined ones, creating operational territories, new urban forms, and trans-regional infrastructures that aim at (though rarely achieve) the frictionless accumulation and circulation of commodities while driving processes of extended urbanization challenging city-centric “urban age” discourses.

To summarize: Firstly, the logistics city stands out as a different urban form for the ways in which it stitches together diverse urban spatialities and regions across the Global North and South, continuously reconfiguring connections according to the demands of supply chains neither constrained by sovereign rule nor national borders. Conceptualizing logistical urbanization as an irruptive, uneven and relational historical process whose dynamics extend far beyond sites of agglomeration, secondly, adds a critical perspective to mainstream city-centric “urban age” discourses. Finally, the fact that logistics is anything but smooth, but rather entrenched in histories of violence, exploitation, and dispossession, should not be overlooked. With its roots in military tactics, it more often than not produces splintered landscapes of connectivity, altering as well as reinforcing patterns of socio–spatial inequalities, colonial legacies, racialized hierarchies of labor, and the externalization of environmental costs to regional hinterlands. A sustainable city would be something different.